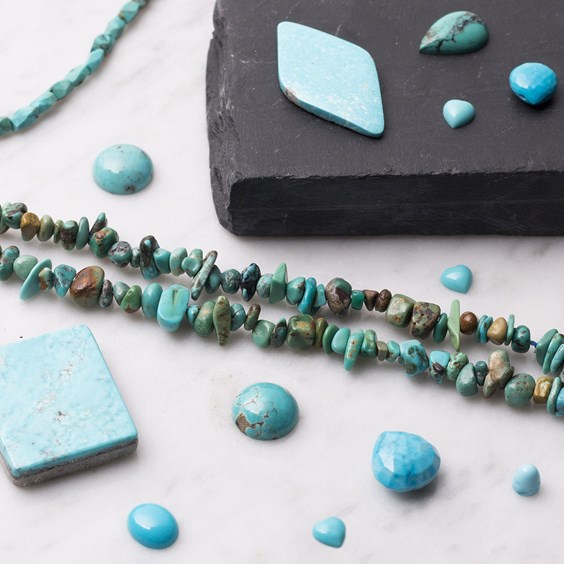 Turquoise is the birthstone of December. It is one of the first ever gemstones to be mined and has long been prized for its intense and desirable colour. Turquoise is a widely available stone, however it is rarely found in its pure, natural form which we will share more about in this post.

Turquoise can be sky-blue, blue-green to apple green. The most prized colour is the typical robin egg blue colour. 'Sleeping Beauty Turquoise' is a pure blue colour and is very sought after. It was mined in the 'Sleeping Beauty Mine' of Arizona, USA which has now closed. Persian turquoise also has this bright sought after colour. A lot of turquoise such as Chinese turquoise contains matrix - brown, black or grey veins, which is part of the host rock which the turquoise has grown amongst.

How Turquoise Gets Its Natural Colour Variations

The blue shades of turquoise occur when there is the presence of copper in the rock where the turquoise forms. The green shades form when there are high concentrations of iron present and the yellow/green shades form when zinc is present - however this yellow/green shade of turquoise is very rare. Turquoise can also be marked with dark veins that run through it called 'matrix'. Essentially these are the remnants of the rock that ‘hosted’ the Turquoise as if formed from weathering and oxidation processes over millions of years. The matrix can be different colours, depending on the host rock. Black matrix is often favoured due to the contrasting black and blue colours. The brown matrix turquoise is often formed by the iron oxides hematite. Spider web turquoise is another name for turquoise matrix and takes its name from its spider web-like patterns of the thin lines of matrix running throughout them.

The birthstone of December is an opaque to semi-translucent stone, light and very fragile. It is commonly found in microcrystalline, a material formed of microscopic crystals. On fresh fractures, it has a waxy or vitreous luster.

In its natural form turquoise is very rare and accounts for less than 3% of the turquoise available on the market. However stabilised turquoise is much more common. This is when the stone has been treated in some way to deal with two main problems that are associated with a lot of turquoise, its softness and porousness. The most common form of stabilisation is with a clear epoxy resin. The resin, under pressure, absorbs into the rock, which permanently hardens the rock making it harder and more suitable for use in jewellery. Another common form of turquoise on market is colour enhanced and stabilised Turquoise and reconstituted Turquoise, which is becoming more common as good quality turquoise rough material gets harder and harder to find.

FORMATION AND HISTORY OF TURQUOISE

As water moves through porous rock, minerals are dissolved, such as copper, aluminium and iron. Over a long time, these minerals accumulate in pores and cracks to form deposits of the material we know as turquoise. The colour of the stone varies depending on the amount iron and copper present.

The name turquoise is said to derive from 'Turkish stone' because the trade route that brought it to Europe came via Turkey. Turquoise was being mined by 4000 BC and is used for jewellery, amulets and in preparation for cosmetics.

Turquoise is thought to be a protective stone that has been used for amulets for centuries - an amulet is a small piece of jewellery thought to give protection against evil, danger and disease. It is said to dispel negative energy and provide protection against pollutants in the environment. The birthstone of December is also thought to enhance intuition, as well as release inhibitions and prohibitions which allows the soul to express itself. Turquoise is also said to assist creative problem solving and calming the nerves when speaking in public, as well as being a promoter of self-realisation.

Physically, turquoise is said to be an excellent stone for exhaustion, depression and panic attacks. It is thought to enhance the physical and physic immune systems, regenerate tissue, support the assimilation of nutrients, alleviate pollution and viral infections and heal the whole body. 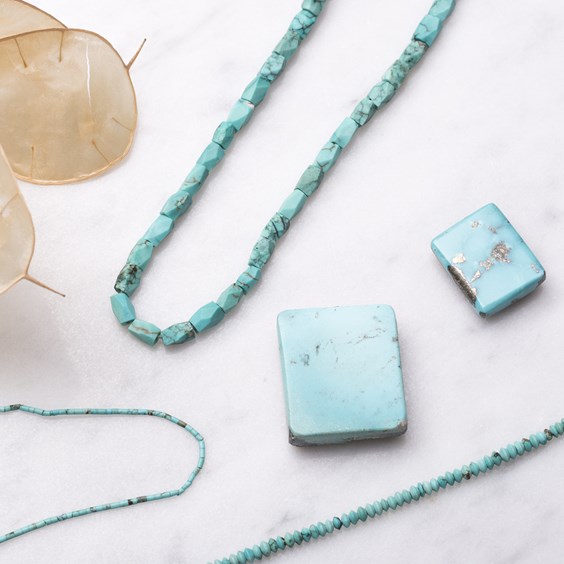 In brief 97% of all turquoise sold is stabilised - due to the decrease of natural turquoise being found in mines across the world it is very rare to see totally natural and 100% untreated turquoise available to buy in beads or cabochons for jewellery making.

The majority of turquoise available to buy for making jewellery has been stabilised in some way to make it more sturdy and suitable for cutting into beads and cabochons. A lot of turquoise has also had some sort of colour enhancement.

Unfortunately not all suppliers are as honest and unless you can insist on getting it in writing from the seller or ask them to certify that their turquoise is natural you may think you are buying natural turquoise but in fact, you have been sold is stabilised.

We supply a large range of turquoise here at Kernowcraft with a wide range of varieties available. It is for this reason we wanted to make clear the different processes of making turquoise accessible for jewellery making.

Stabilising is when soft turquoise has been infused with a clear epoxy resin. The resin, under pressure, absorbs into the rock, which permanently hardens the rock and deepens the colour. Unlike natural turquoise which deepens in colour over time by gradually absorbing oils from the skin as it is worn, the colours in stabilised turquoise are permanent. Most of the turquoise on the market is stabilised and should not cost as much as natural. Stabilised turquoise can be very beautiful, and is a good buy.

As turquoise is getting harder and harder to find it means that the turquoise mines have been depleted and closed. The turquoise being mined now is of a lower quality and as a result of this the appearance of the turquoise is being enhanced - this type of turquoise is reconstituted. Reconstituted turquoise "chalk" that is very low grade and has been ground into powder, saturated with epoxy resin, dyed, and compressed into blocks or cakes to be cut into shapes for jewellery making. Prices should be inexpensive.

This is turquoise that has not been treated in any way with dyes, stabilising epoxies, or other chemical treatments intended to alter the colour, hardness or lustre of the stone. Natural turquoise cannot easily be found in the marketplace and as little as 3-10% of turquoise mined is of sufficient hardness to be used in jewellery. The turquoise that is suitable to be used is so beautiful that it is simply mined, cut, polished and set into a piece of jewellery or carved into a fetish or sculpture. Check out our turquoise category to see whether we currently stock any untreated, natural turquoise.

Learn more about untreated natural turquoise in this blog post.

The Different Types of Turquoise

There is a vast variety of different turquoise. As with many gemstones, this is due to the location in which it was formed and the minerals and host rocks in this location.

Visit our turquoise category for our full collection in a range of shapes and sizes to suit you. 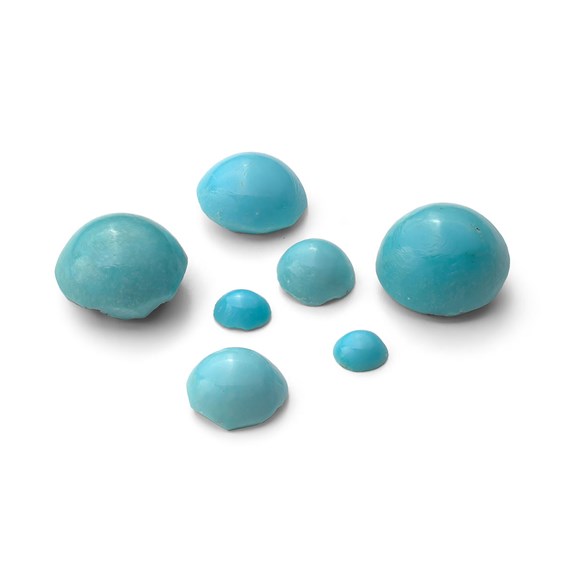 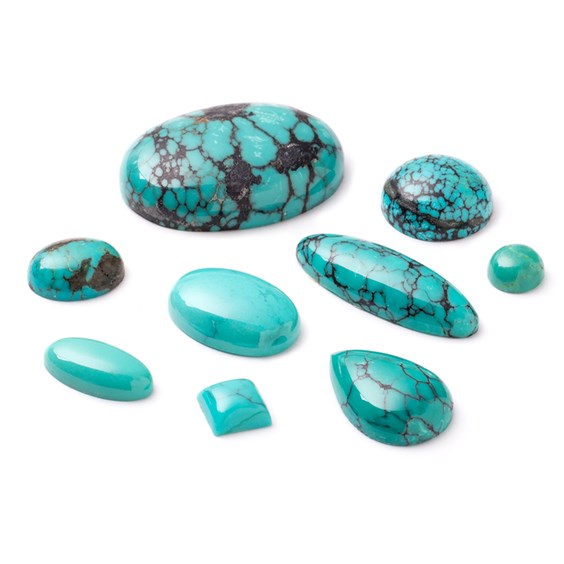 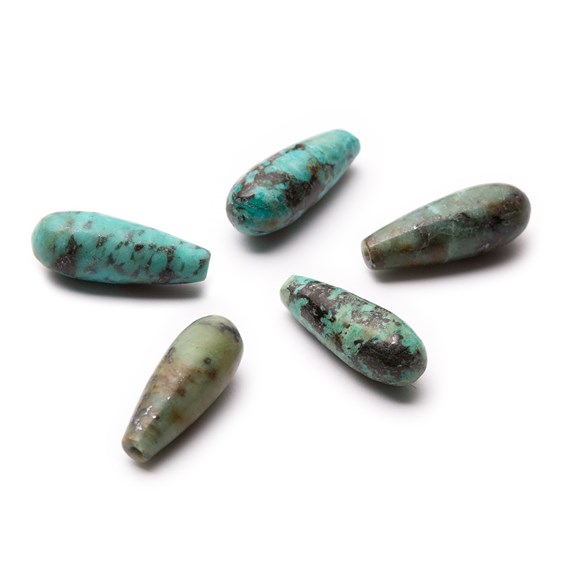 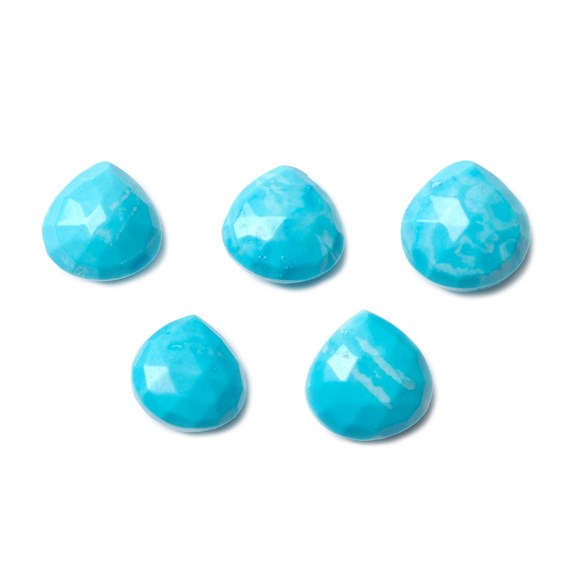 We love turquoise here at Kernowcraft and so do our customers! You'll find a wide range of varieties of turquoise as cabochons and beads.

Browse our turquoise gemstone category and don't forget to check out our free jewellery making tutorials for guidance. Visit our jewellery making kits for more inspiration, with online step by step instructions and a handy one click shopping list. 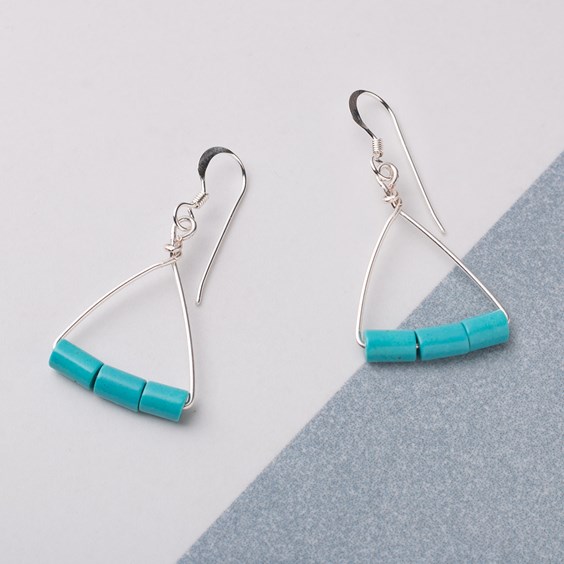 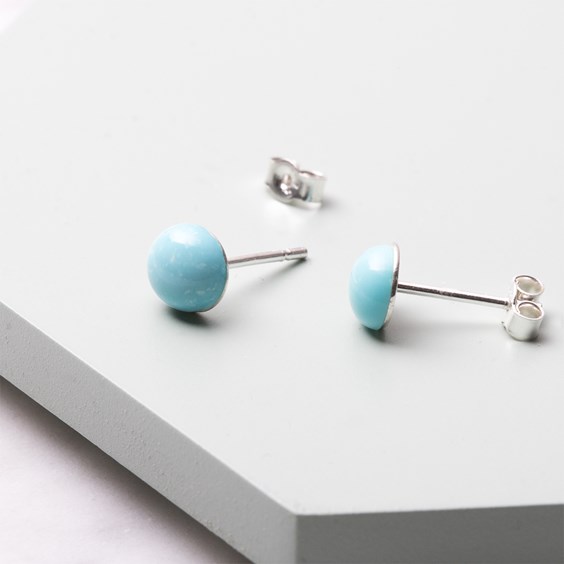 We've set our beautiful turquoise cabochons onto flat plate earstud settings with glue for a quick and easy design. Explore all of our cabochon settings here. 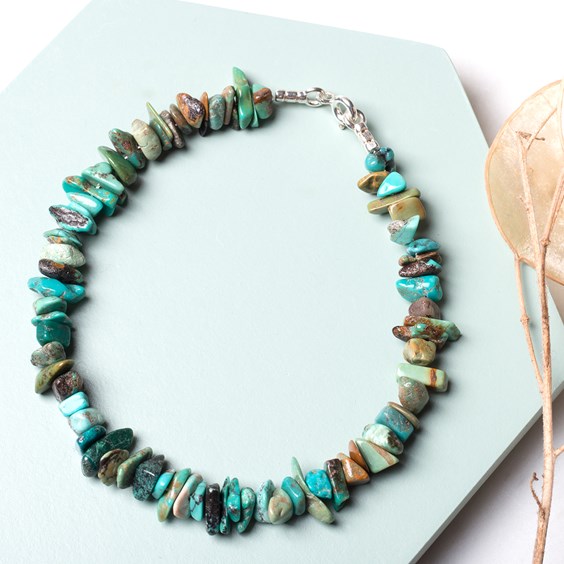 This pretty design using our Chinese turquoise chip beads and Flex-rite jewellery wire to create a bracelet. Learn how to make a bracelet here. 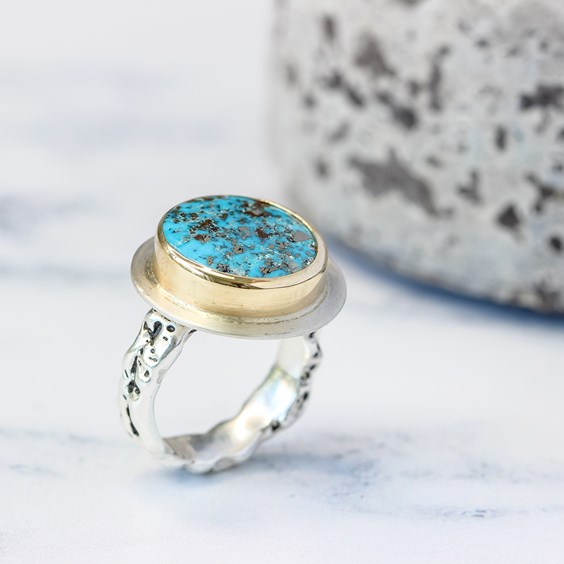 We love this textured design! Read more about Karen Young in our interview all about running a small jewellery business. 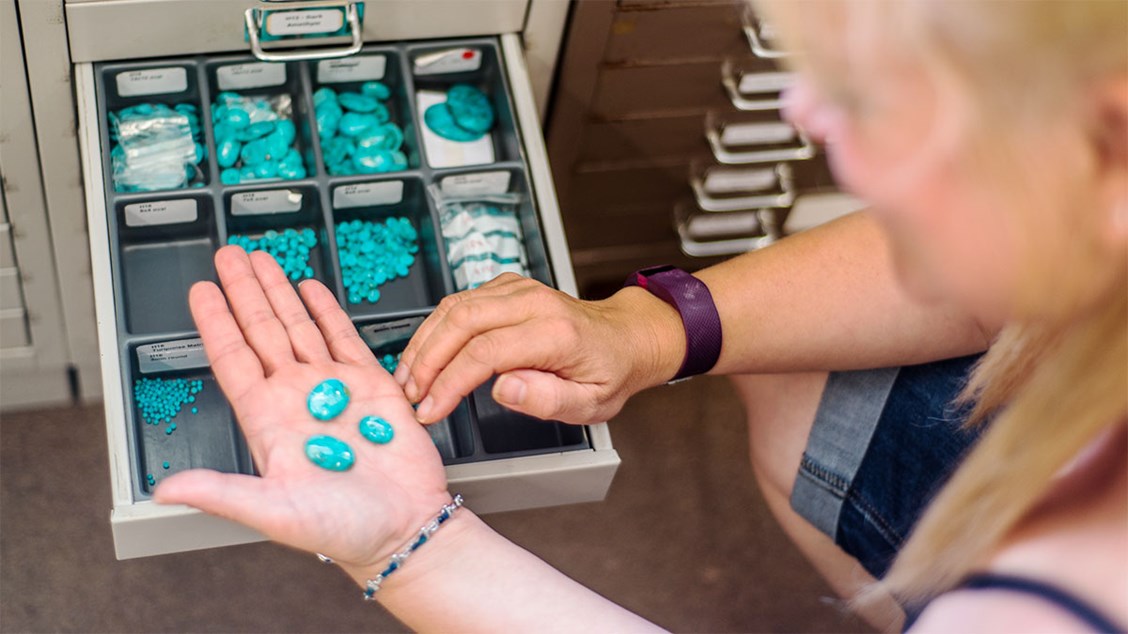