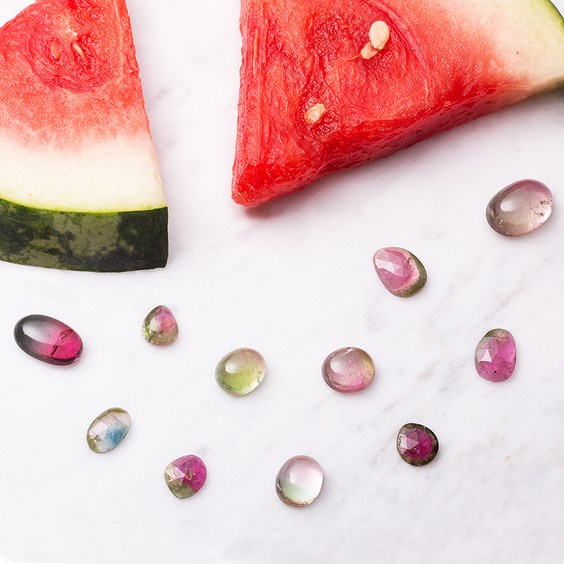 Watermelon tourmaline (or bi-colour tourmaline) is a stunning multicoloured gemstone, resembling the juicy fruit we all love! This natural and unique colouring makes this gemstone a popular choice among jewellers. Find out everything you need to know this unique gemstone and how you can use it to create interesting and vibrant handmade jewellery.

Colour: Watermelon tourmaline has the colouring of pink/red and green, usually separated by a white streak. It gets its name as it resembles the pink flesh and green rind of a watermelon.

Appearance: Watermelon tourmaline is a transparent gemstone, which is usually cut as thin polished slices to display their unique colouring. They are also available as cabochons and faceted stones. 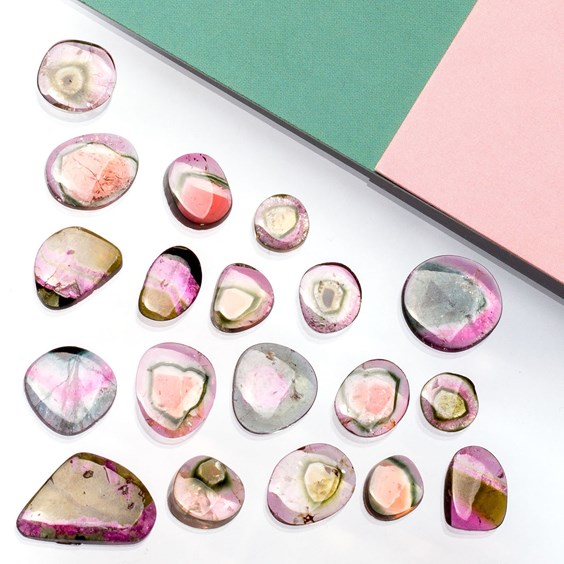 Formation: Watermelon tourmaline is found within veins of rock from molten magma from volcanoes. When the magma cools, it forms cracks which fill with water and minerals such as iron, lithium or manganese which then forms crystals.

Moh's Scale Hardness: 7-7.5, making it a tough stone perfect for creating jewellery with.

Healing properties: Watermelon tourmaline is believed to be linked to the heart chakra. This healing and emotional stone is said to help you find joy, reduce fear and fosters love, tenderness and friendship.

If you're lucky, you'll find limited edition one-off watermelon gemstone slices on our website! Head to our tourmaline category to see if we have any available 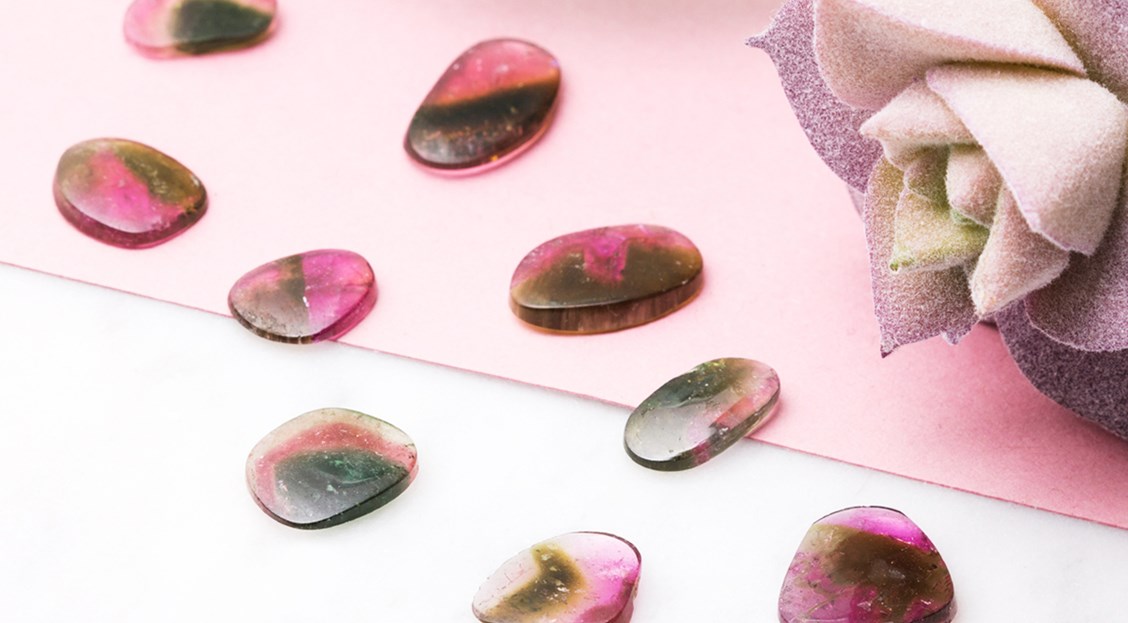 Shop All Tourmaline Gemstones With Kernowcraft

Tourmaline is known as the 'gemstone of the rainbow' because it comes in a stunning selection of colours! No two stones are the same and you'll often find two colours in one stone such as watermelon tourmalines, the bi-coloured stone.

At Kernowcraft you'll find a wide range of tourmaline stones for your jewellery designs, including cabochons, faceted stones, crystals and beads in a range of shapes and sizes. 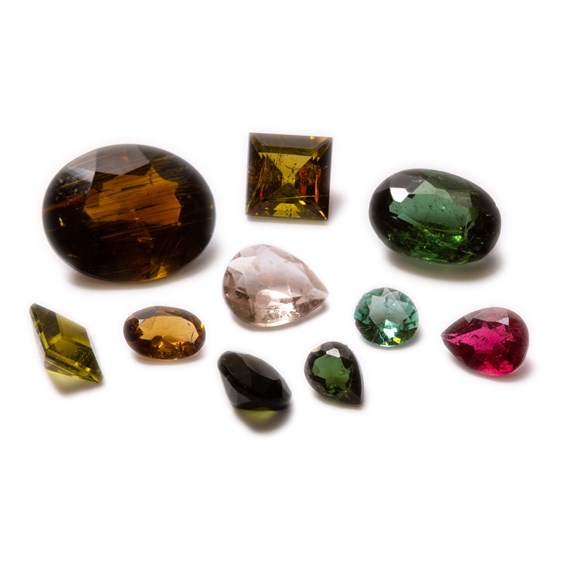 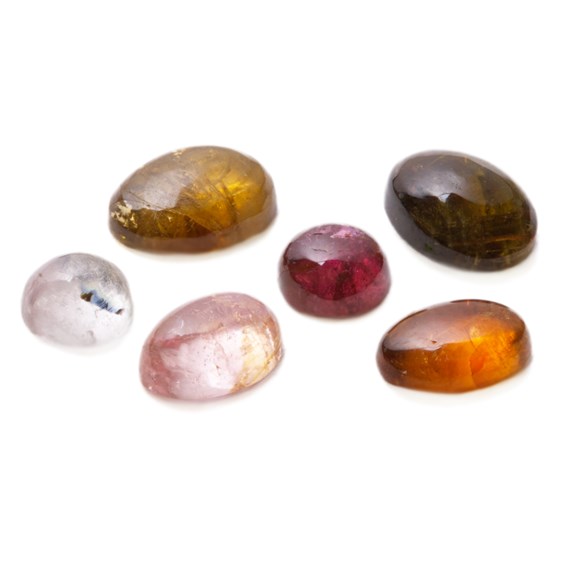 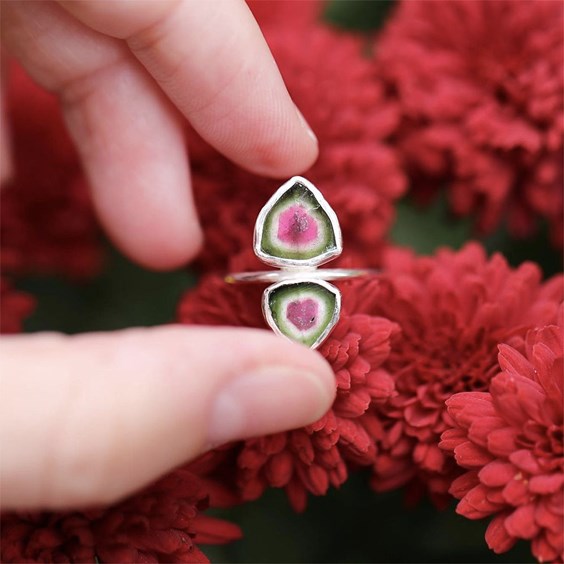 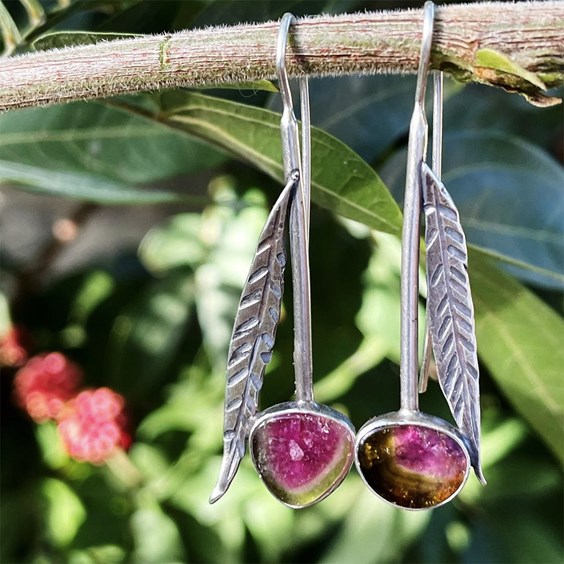 @jivitajewelry  - "Watermelon Tourmaline is such a lovely gem, so rare is it to get a gemstone with so many colors layered like a rainbow. This pair of tourmalines were transformed into a drop earring referencing a spring flower, with long leaves like a tulip, I imagined this metal flower bursting through the winter soil with a rainbow of color." 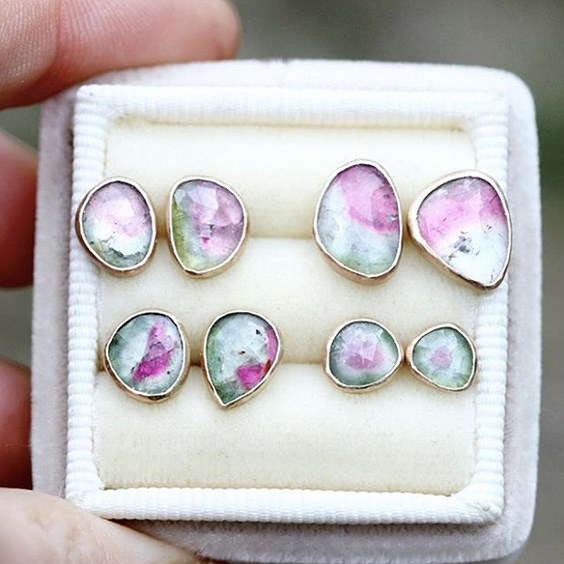 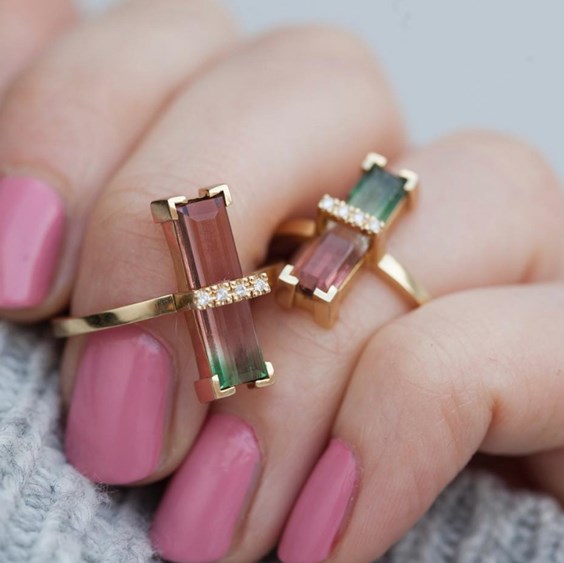 Capucinne Jewelry - "Oh these tourmalines. The only gemstone that makes us crave for summer asap!" 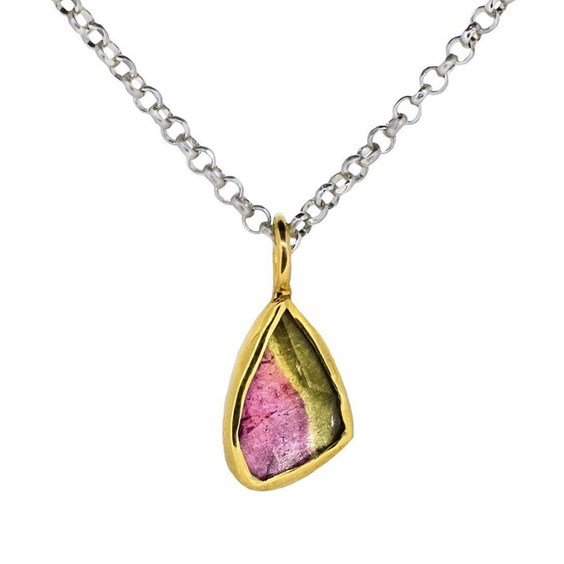 @polkadotgallery by @margoni_jewellers - "Adding a bit of colour to a dull day with this watermelon tourmaline necklace. Set in 18ct yellow gold and hung on a silver chain." 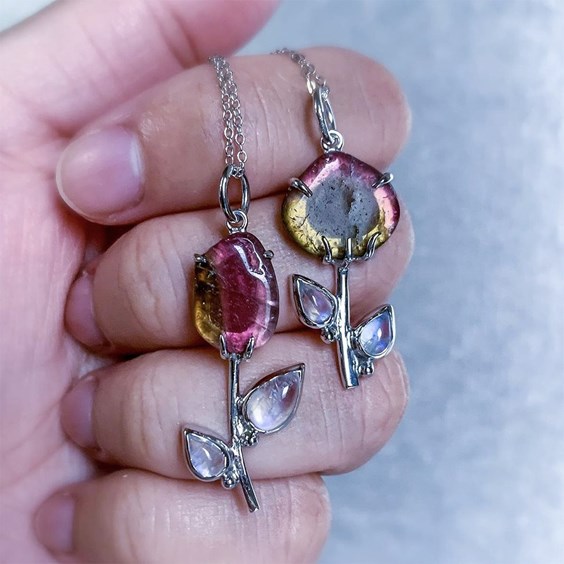 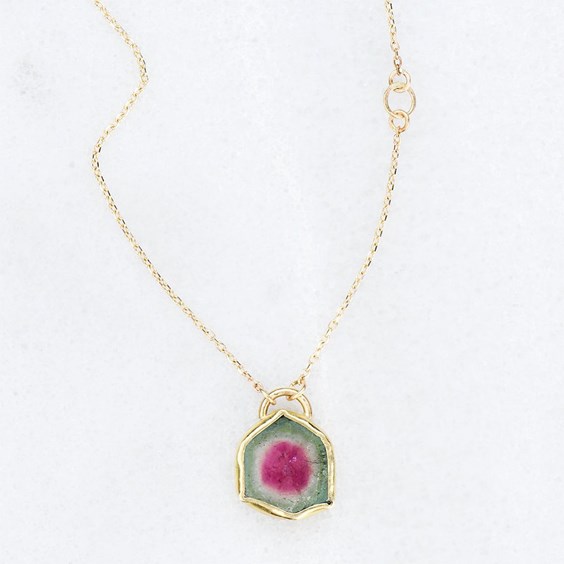 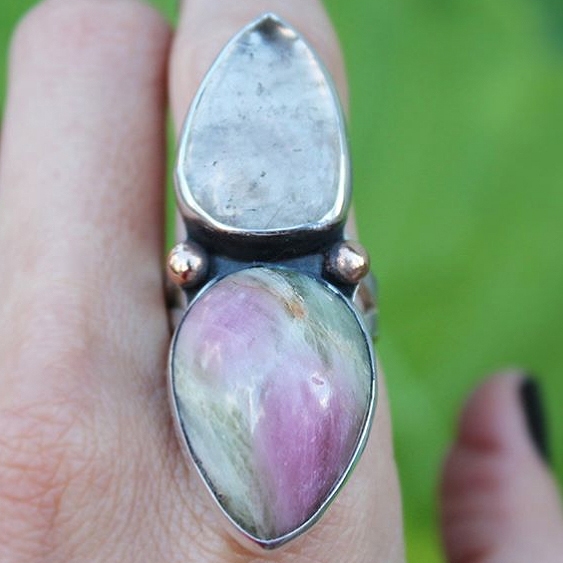 Gather Jewelry - "Fresh off the bench. The bottom stone is a truly special antique piece of pastel watermelon tourmaline that I’ve been hoarding for a couple of years now. Paired with a pretty piece of rutilated quartz, and accent the combo with warm brass detail." 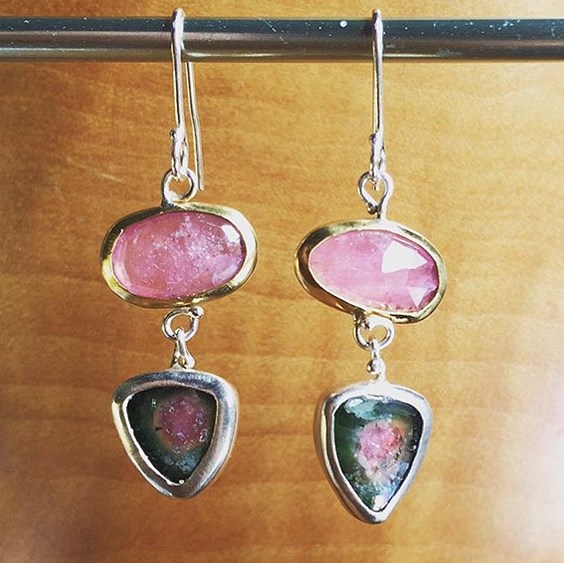 ledajewelco - "Rose cut pink sapphire earrings with watermelon tourmaline drops. Balance your heart and mind and heal your own fine self!" 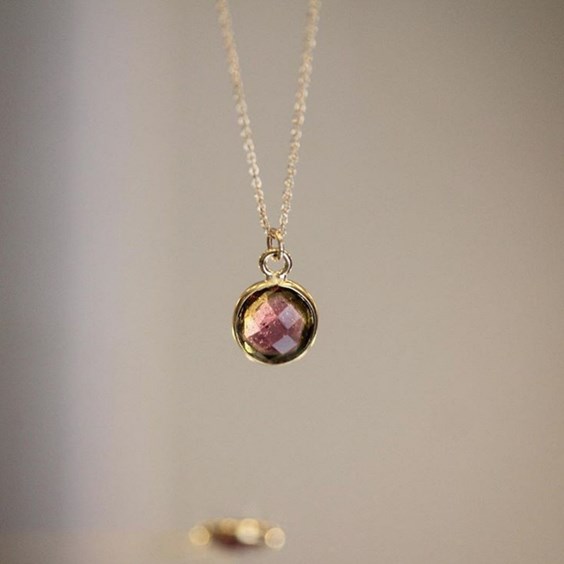 A faceted watermelon tourmaline stone set into a pendant, by norbu_bijoux.